Godhra is one of the attractive tourist place, which is also surrounded by many beautiful locations such as Umbergaon Beach, Pavagadh Hill, Ratan Mahal Wild Life Sanctuary, Porbandar Birds Sanctuary, Sun Temple, and so on.

Umbergaon is a place and a city which is small by itself, situated in the Valsad district, which is very close to Godhra. The environment of this beach is very quiet and peaceful, which is best for relaxation, refreshing and even for meditation.

If you visit Umbergaon beach, you can also visit other places like fishing harbour, as well as the temples like Ganesh temple, Vishwa Karma temple, Radha Krishna temple, which are among the tourists attraction.The local fare happens very frequently in Umbergaon and it is one of the happening events which attract many tourists across the country.

This Ratan Mahal Sloth Bear Sanctuary near Godhra, has a spectacular view of itself, and it also serves as a natural dwelling place for the incredibly beautiful animals like the Hyena, the four-horned Antelope and the Porcupine, the Jungle Cat and Hanuman Langur, Mongoose, the Star tortoise and Flap-shell Turtle, as well as the Jackal can also be seen. Even, you can watch different kinds of Snake  Species such as the Rat snake, Cobra, the Python and Krait, as well as the Russel's viper and Saw-scaled viper, Bamboo pit viper am so on. 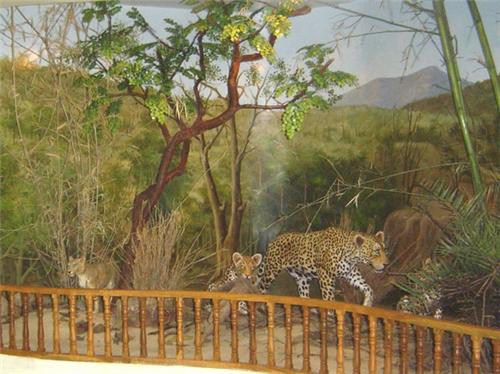 The jungle is also filled with different species of commonly known birds, and 16 different kinds of terrestrial species of birds which include the grey jungle Fowl, the Partridge, and the Quail which keeps nesting, and forage on the ground as well. Whereas, the most common birds are Alexandrine parakeets, the common Babbler, also the crested Serpent Eagle, the Green Pigeon, as well as the Golden-Backed Woodpecker, the Grey Jungle Fowl and Tailor Bird, etc.

The forest contains different types of trees like a dry teak wood situated at the foothills, and in the peripheral region of the deciduous forest. While, bamboo grass and jamun trees provide a good and favorite source of food for these animals, especially during the monsoon season in the sanctuary.

Porbandar Birds Sanctuary is one among the great birds destination, which is located in Porbandar district, on the western coast of Saurashtra, Godhra. This sanctuary acts as a home to many indigenous species of birds for the whole year, as it falls on the migratory route of the birds and many migratory birds like teals, fowls, flamingos, ibis and curlews are found.

The stupendous combination of nature with chirping and twittering of birds, makes it a fabulous destination for tourism throughout the year, especially for bird lovers, biologists, environmentalists and Ornithologists (who study on birds). 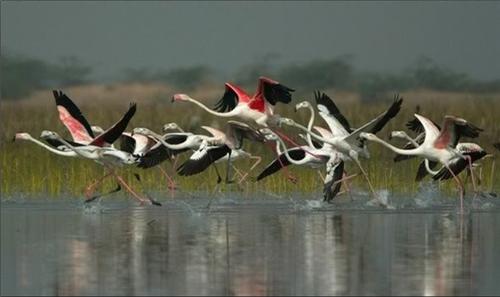 Several beautiful birds such as Flamingos and Grebes, the Pelicans, Ducks and Geese, the Avocets, as well as Coots can be seen. Apart from these you can also watch Cormorants, the Herons, Egrets and Bittern. Even, you can become a witnesss of the birds like Storks, Spoonbill and Cranes, the Whistling Teals, including Jacanas, Ruff and Red shanks, as well as the Indian rollers. You will enjoy this wildlife journey seeing the beauty of many other species of winged creatures with distinctive colors, and different sizes, which come here from a very long distance.

A day in this beautiful place makes mind and body relax, free from all hustle and bustle of the city. The combination of nature, chirping birds and a beautiful lake takes into a trans-state which will be rejuvenated.

Udvada Beach is the most beautiful, mesmerizing sea shore which is made up of muddy brown sand and rocky terrain region. This place is populated by the fishermen’s community who reside in Udvada. In this sea shore, there exists a small port by name Sanjan, where the pillar lays, this pillar is a mark by where the Parsi community entered Udvada and invaded this place. Udvada is a small town near to Godhra which is well known for its Zoroastrain.

This place not suitable for water sports and other water activities, while it has proved to be a great and best place to relax and enjoy the scenic beauty of this place. There are olden types of huts and houses, which are built along the sea shore, and they prove to be a great back drop for great pictures and photographers, who can enjoy taking such pictures.

The Sun Temple built near Godhra, is the most prestigious of temples in Gujarat. It was built in 1026 AD by by King Rushabh Bhimdevi, one of the rulers of Solanki dynasty. The Solankis were known as descendents of Lord Surya, and thus built the Surya temple in a unique, magnificent and mesmerizing way, which attracts tourists with its exotically vibrant structures with ingenious beauty.

The temple looks similar to the Sun temple of Odisha, which was built two centuries later.
At the entrance, there is a large rectangular kund or pool known as 'Ramakund'. It consists of around 108 shrines of various Gods. While in the premises of the temple, a Sabha Mandap is situated which consists of 52 pillars carvings on them that represent Lord Surya in twelve different months. 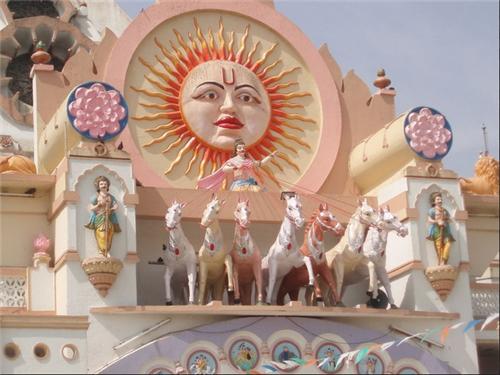 It has been said in Puranas that, Lord Rama constructed this temple in Dharmarayana and according to the epics, after defeating and killing Ravana, Lord Rama wanted to go to a holy place to purify Himself, as he was a Brahmin, and Sage Vashishta showed Rama this place for Yagna. So, this place is a place, where Lord Rama performed Yagna.