Godhra city of the Gujarat is located exactly upon the west coast of the Indian Peninsula and it is surrounded by the Arabian Sea. Gujarat fills the northern appendage of the western sea-board of India that has the longest coast line of 1290 kms.

Actually, the Gujarat state can be separated into several regions such as Kutch, also the Saurashtra, the Kathiawad, and the Northeast of Gujarat as well. The state comprises of 3 geographical regions – Kutch is located on the north-western border of the Gujarat; whereas, in the north of the region is the ‘Rann of Kutch’ which is a desert of Kutch, also this Rann is categorized into – the big Rann at the north side and the little Rann in the east. In between the ‘Saurashtra’ which is a hilly piece of land spread with small mountains, and the ‘Khambhat’, also there is a Kathiawad as well, which has a maximal elevation of 180 mts.

The main land that extends from the Rann of Kutch and the Aravalli Hills to the river Damanganga is on the whole alluvial soil. The Central Kutch region extends to Northeast Gujarat and the region has small hills and plains. Southeast Gujarat is an extension of the Western Ghats and receives the highest rain in the state. The forest in Gujarat is very less but still it supports more than 40 types of animals such as – Asiatic Lion, the wild ass and black-buck. An assortment of birds and reptiles completes the tally of wildlife this state supports. 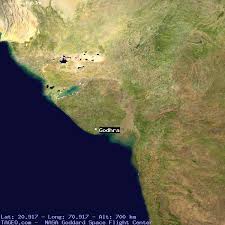 There are several rivers and lakes in Godhra, among which few are most famous Kali, Dhadhar, Gautami, Gomati, Narmada, Banas, Panam, Purna, Sabarmati, Saraswati, Tapi, Vatrak, Vatru  and many more.

As per the records there are around 108 lakes which consists of the lakes inside and surrounding part of the Godhra, Gujarat. Few are namely – Saputara Lake, Sursagar Talav, Vastrapur Lake, Gandhinagar Lake, and so on.

Godhra' s mountains are not only rich in scenic beauty but also they have been linked with many religious as well as historical views.of the people. The north as well as the east borders are made up of mountains which are said to be the branches of outside ranges such as – the Aravallis, the Vindhyas, the Satpuras and Sahyadris as well.

The Aravalli is found to be the very old mountain range in Godhra that can be seen at Abu and up to the Pavagadh which is combined with the Vindhyas. The Taranga comes on the same direction from the Mehsana to Visnagar and thereby from the Aravalli it moves in the way of Danta, including the Khedbrahm as well as the Idar along with Shamlaji that reaches the Vindhyas.

Saurashtra consists of two parallel ranges, one that expands from the east to west; while, the other from northeast to southwest and the rocky region of Saurashtra includes 2 mountain ranges, among which the north part is found to be 357 metre peak in the Panchal region.

While, the pathways of saline land of Kutch have 3 mountain ranges –  one of the range moves by the Pachham, the Khadir and Pranjal; also, the Kala Parvat becomes part of the ranges that stay between Kutch and Sind; whereas, the southern range starts at Madh and goes up to Roha.

The Girnar includes the largest mountain in Gujarat which is about 1,145 meters; whereas, the highest peak of Ginar is named after Guru Dattatreya, the Garakhnath, also the Amba Mata and Kalika Mata are the names of the other peaks of Girnar. And there is also a tiny hill just beside the Girnar, which is called as the Jamial Shah Pir, a holy place of Muslims.

However, the ranges of the Sahyadri resides over the Tapi with the maximal rainfall and the think forest; whereas, the Satpura is located within the Narmada and Tapi at Rajpipla hills.

Godhra is said to be the second largest gas producer in India; whereas, the Fuel and Fossils in Godhra includes Oil and natural gas, which will move into different process at fossil fuel organization when compared to coal.

Flora in Godhra city consists of a wide range of vegetation as well as different climatic conditions that alleviates many types of flora which includes more than 400 species. Thus, flora of Godhra city in Gujarat is found to be one of the biggest dry deciduous forests situated in the western part of India, which consists of trees such as teak, the Boswellia serrata as well as Anogeissus latifolia, the Diospyros, and so on.

Godhra consists of a broad coastline as well as the rivers, the lakes and ponds which have many types of fishes. Besides Asiatic lion, also the tiger and the panther as well as the cheetah, the wolf and jackal, along with fox, the Civet, and the greyish langur, some kind of rabbits and hedgehog are also available in the forest areas.

The wild ass is a different type of species available in the Rann of Kutch as well as the thick forests of Dang, that receive enough rains and more greenery is found, that are the home of beautiful birds such as the Trogon, the horn-bills and the barbets as well as the babblers, etc.

The wide coastal regions of the state that provides shelter to several birds such as the plovers, the stints, the sand pipers and the curlews, the lesser flamingoes, terns and gulls as well.

The important measures for the widening of the forests becomes the cause for the conditions of temperature and a heavy rainfall. In Godhra, certain furrowed areas will get maximum rainfall than the plains and this rainfall raises from the plains to the mountains.

The forests are thus condensed in the hilly areas of the Godhra city in the south-east mountains of Saurashtra. Moist Deciduous Forests occur in darn areas of Vyara in Surat. These forests are not always green, thus shed their leaves especially during the seasons like March and April.

A large part of the forest is economically contributed in the districts of Dang and Panchmahal, the Broach also the Surat city, the Bulsar as well as Junagadh, Sabarkantha and Banaskantha, etc. The south and south-eastern parts of Godhra supports the development of the tropical deciduous forest represented by the teak and the Shorea Robusta for which the district of Bulsar is well known.

The thorny forests occur either in Kutch or the north Saurashtra and the Banaskantha district which are categorized by the Acacia Arabica, also the Acacia Leucophloea, even as Capparis Ophylla and Zizyphus Mauratiana,  etc.